For the fourth time, the University Hohenheim / Germany has published its plain-text-ranking of CEO annual meeting speeches. The communication scientists led by Prof. Brettschneider are using a special formula to calculate the formal understandability of the often hour-long speeches. Criteria that enter the formula include the length of sentences, the share of sentences with more than 20 words, the share of non-German expressions, the share of sentences with more than two information units and many more. The result is the plain-speech/text-ranking, with a range between 0 and 20 points (20 being perfectly understandable). 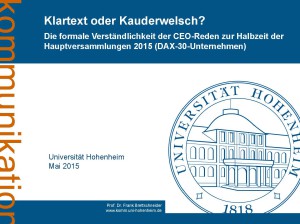 Overall the scientists conclude that companies are working to make the speeches more understandable. Compared to last year, the average score increased by 0.8 points (13.1 points in 2015, 12.3 in 2014, 9.8 in 2012). Brettschneider concludes that companies are trying to reach a more diverse audience with their annual meetings and therefore try to make the speeches more accessible for the general audience. But obviously there is still a lot of potential. Currently, the ranking is led by the CEO of Volkswagen Martin Winterkorn and Martin Blessing of Commerzbank, each scoring 17.2 points. Particularly Winterkorn saw a huge improvement over his 2014 score (13.0). Michael Diekmann head of Allianz AG takes the last position scoring a low 8.4, mainly due to his extensive use of long and nested sentences.

A short presentation with more information (currently only in German) is available from the university website: https://www.uni-hohenheim.de/uploads/media/2015_CEO-Klartext_Halbzeit.pdf